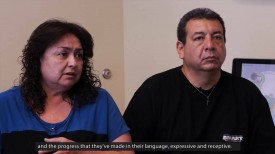 Manuel and Carol have twin sons who were born eight weeks early and weighing only two pounds. After spending seven weeks in NICU, they came home together but were late to begin talking. 18 years later, the boys are about to graduate from high school. Manuel and Carol were kind enough to share their sons’ journey using Fast ForWord with us. See more of Manuel and Carol's story on YouTube >

Tell us about your twin sons' history.

Manuel: We noticed there seemed to be some sort of a language delay around the age of two and a half to three. They developed a twin language. That was the way they communicated with themselves. Obviously, it wasn't consistent with normal child development, because we do have an older child, so we've had a little bit of experience on how it should go. We started having them examined, took them into a neurologist and various doctors, and they were diagnosed with central auditory processing disorder, which is, for those who don't understand, it's how we process sounds, or what things are said to us. Most learning comes that way.

How did you find out about Fast ForWord?

Manuel: We found different tutoring programs that would help them. Wings Speech & Language Center has done a great job. We've known Liza (Herrera) since before she opened this center. She knows the boys' history very well. When she identified Fast ForWord as a potential program for them, we were very excited. We did our research and discovered that potentially it could help them. They've done it pretty much every year since the age of six or seven.

How did you make sure your twins didn't lose progress over the summer?

Manuel: Three months [in the summer] is a long time not to have any kind of educational development, when you talk about people that are behind in their development. What we ended up doing was putting them [on Fast ForWord]. The first couple of years that they went through it, is they seemed to gain over the summer, as opposed to lose, or even stabilize. That was a huge sign for us. We even decided that rather than send them to summer school, we would just focus on Fast ForWord. We've done that ever since.

What other changes have you seen since your sons have used Fast ForWord?

Manuel: As someone with central auditory processing disorder, you tend to over-develop visual learning skills. I know with the program, they do a lot on the computer itself and the program helps them to react and to read. As they've gotten older, I have no doubt that that's where they've been able to pick up some of their lacking in processing through hearing. The boys are now seniors this year in high school. They've actually played four years of high school football, which we don't know if that would've been possible without their ability to recognize things and understand things, with their brains not processing properly.

What about their expressive language?

Manuel: It has actually gotten stronger. The key thing is that we've been back to the doctor's over a period of times to get an understanding of where they are, the key component is we continue to see growth. Their expressive language has grown, and it is getting stronger. They are able now to go beyond just one word comments or answers. They can actually start formulating sentences, and even structural conversations. Maybe not the level that you would expect at their age, but definitely something that you can communicate with, which is good for them, because it helps them understand and socialize more, make them more comfortable.

What changes have you seen in your sons, Carol?

Carol: They went from speaking one word to two words to complete sentences. Every summer, we would do Fast ForWord. Now, at their age, they're doing things beyond what I had expected for them. It's an amazing program. It's just really woken up their brains, for me, that I've seen the progression, because as parents, you know from the get-go there's something amiss. Then, what are you going to do? Once you find something that is so amazing as Fast ForWord, and the progress that they've made in their language — both expressive and receptive. You just don't want to stop. That's where we're at now. They're going to be graduating, and I still want to continue the program with them.

What advice would you give other parents trying to find the right program to help their child?

Manuel: You have to find what works for your child and their development.

Why do you think Fast ForWord was the right program for your child?

Manuel: Fast ForWord stimulates different parts of the brain to overcome areas that may not be as developed, and we've seen it. We've actually seen that process in itself. Number one: I would say don't give up. It takes time. The neurologist told us it could take 5, 10, 15, 20, 25 years. Nobody knows how long it's going to take them to overcome this delay, and basically get it under control to where they are functioning normally in that aspect of their life. You have to keep on it, and you have to find what works. Don't expect miracles. They will come over time, but don't expect instant miracles, because it does take a lot of work, and a lot of commitment. It is for their benefit, because the reality is they're going to get bigger, they're going to get older, and they're going to need to be able to function. How are they going to function if they can't understand? Things like this make a huge difference in them being able to understand and grow.

Carol, what advice would you give to other parents?

Carol: I agree with Manuel. It's finding something, and if you see the fruit in it, stick with it, because all through the years, we've seen progress. Ultimately, our goal is for our children to be self-sufficient in the world. That is our goal, so we'll never stop. We'll just keep going. Like I said, for us, the program is something that we've seen so much fruit with so we will continue it.

Any last thoughts about what you have seen with your sons and Fast ForWord?

Manuel: It can be that simple, and the brain being the most amazing part of a human, nobody knows what it can do completely, but you won't know until you try. Programs like this challenge you. They step you out of your norm of things that we do as normal individuals by just developing who we are. You'd be amazed at what can happen. Just got to keep working and find the programs.