Implicit vs. Explicit Instruction: Which is Better for Word Learning? 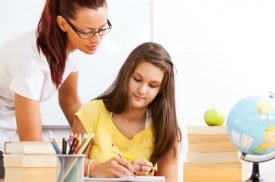 As educators, we are constantly faced with the question of how we can best present material so that it is optimally “learnable” for the different students we are trying to reach.

There is considerable evidence both for and against self-directed and exploratory learning, so there is a great opportunity for neuroscience to examine the ground-level differences between these and more traditional methods of instruction and how the brain reacts to each. One of those differences is the subject of current investigation: the divide between explicit and implicit instruction.

By explicit instruction, we mean teaching where the instructor clearly outlines what the learning goals are for the student, and offers clear, unambiguous explanations of the skills and information structures they are presenting.

By implicit instruction, we refer to teaching where the instructor does not outline such goals or make such explanations overtly, but rather simply presents the information or problem to the student and allows the student to make their own conclusions and create their own conceptual structures and assimilate the information in the way that makes the most sense to them.

Which is more effective?

One study out of Vanderbilt University recently looked at this question as it applies to word learning. In this study, principal investigator Laurie Cutting and her team examined 34 adult readers, from 21 to 36 years of age.

The goal was to gain a clearer understanding of how people with different skills and capabilities processed short-term instruction, how effectively they learned, and how those differences looked physiologically in the brain.

In the end, the subjects were all able to learn the pseudowords. But, through functional magnetic resonance imaging (fMRI), the researchers learned that something deeper was actually taking place: subjects previously identified as excellent readers showed little difference between how they processed explicit vs. implicit instruction. Average readers, on the other hand, showed through their fMRIs that they had to work harder to learn through implicit instruction; for them, explicit instruction was the more effective method.

Granted, the study did focus on a group of adults, not school-age learners. Still, the Vanderbilt team’s preliminary results support the idea that, even in group situations where all students have roughly the same degree of previous experience, prior reading ability might be an important element to consider when choosing an instructional approach.