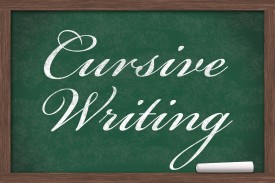 Cursive is becoming obsolete. How can that be?  I remember 1st grade at Glebe Street Elementary School in Johnstown, New York, where we practiced penmanship every day.  I tried to be so perfect writing out my letters.  The next step was learning cursive in 2nd grade!  Once I learned how to make those curly letters, I was considered a big kid, like a rite of passage.  As handwriting has disappeared with the advent of computers and smartphones, this rite of passage (and some people argue an important developmental milestone) may seem old-fashioned, outdated and irrelevant in today’s modern world.

The current research on handwriting is somewhat mixed - some say yes, some say no.

Some educators and the Common Core say handwriting might be not be as relevant because it doesn’t directly tie-in to curriculum.  And many states are no longer required to teach it.  Only a handful of states are still teaching handwriting.  If I were a young student today in upstate New York, I wouldn’t necessarily be learning handwriting/penmanship.  Many skills aren’t deemed relevant if they aren't directly related to skills that state tests are targeting, which includes handwriting.

Why should we teach handwriting?

Popular author/psychologist, Stanislas Dehaene, at the College de France in Paris states that,

“When we write, a unique neural circuit is automatically activated. There is a core recognition of the gesture in the written word, a sort of recognition by mental simulation in your brain. And it seems that this circuit is contributing in unique ways we didn’t realize. Learning is made easier.”

So when we write something down, this research has shown that our brains get activated in ways that aren’t activated when we type something.  And this brain activation helps with recall when we are learning.

Exercise: Think about the last time you wrote something down

Studies are showing that if a student handwrites something rather than types it, it is easier to remember and more ideas come from that as well.

Implications as handwriting continues to disappear

Studies are being conducted to see what exactly a student loses when typing class notes versus handwriting them.  These studies typically ask students to listen to a lecture and either handwrite their notes with a pen and a piece of paper or type them into a computer for later viewing.  They've found that students who handwrite their notes retain information longer and are better able to understand the information given.  The students who are typing the notes are typically good at reciting facts, but have a harder time answering questions that are based on thoughts or concepts.  The students were tested a week later to see what they had retained.  They found that the students who had handwritten their notes performed better.  However, the students who typed their notes had more content , but performed lower when tested on what they had learned from the lecture.  So while it might be efficient to type notes in class, handwritten notes appear to help students retain information better.

With transformation of technology in schools and classrooms today, will educators ask their students to learn the art of penmanship, or will it be a forgotten subject in schools moving forward?  Share your thoughts with us on the importance of handwriting in today’s classroom below in the comment!

States Fight to Keep Cursive Handwriting in the Classroom

Some States Move to Save Cursive in the Classroom