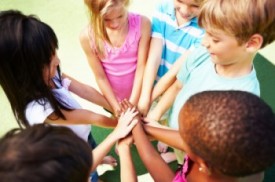 Today, we live in a world dominated by technology. Our interactions with the world and with one another are mediated by computers, tablets and smart phones. The answer to practically any question you might have, at any moment, is a few keystrokes and fractions of a second away. In the same way that print changed how humans perceive information, now technology has once again flipped the world on its head.

“We should seriously consider the claim that we are now undergoing one of the most significant technological revolutions for education since the progression from oral to print and book based teaching.”

Preparing students for today’s world demands that education be delivered in a vastly different manner than what we see today in U.S. schools. In this world where information creation and discovery are taking place faster than we can bring that information to our classrooms, true 21st century learning must involve more than information literacy alone. Certainly, the traditional “3 Rs” – a shorthand way to talk about traditional content areas like reading, writing and arithmetic – play a core role in the 21st century classroom. (For the sake of argument, let’s have the 3 Rs include other traditional content domains like social studies and history.) But in this new world, those “content domains” become avenues for imparting a whole array of 21st century skills – skills that will allow students to function, learn and adapt throughout life in this post-modern world.

The Partnership for 21st Century Skills(P21), one of a number of organizations advocating for a revamped educational system, says that for our young people to be able to compete in the global economy, they need more than the 3 Rs; a new “4 Cs” are also required: Critical thinking and problem solving, Communication, Collaboration, and Creativity and innovation.

Similarly, the National Research Council of the National Academies of Science in Washington DC breaks the same idea down into three areas ( 2012):

In the same way that handwritingis a skill that crosses every domain, likewise our students need these essential 21st Century skills if they are to be successful.

P21 has taken the lead to construct and advocate for the adoption of a complete framework for teaching 21st century skillsthat has become a touchstone among education leaders nationwide. This framework offers an expansive vision that brings core subject knowledge together with creativity, collaboration, critical thinking and communication skills; life and career skills; and information, media and technology skills. ( 2011)

While they are not in the majority, many districts and schools – public as well as private – have taken the lead and implemented 21st Century teaching and learning. What do these settings really look like?

According to 21st Century Schools, such settings “will be laced with a project-based curriculum for life aimed at engaging students in addressing real-world problems, issues important to humanity, and questions that matter.” ( 2012) When true 21st Century learning is taking place:

When we can look at a school and see these things happing in sync, we can be confident that the students are getting the great education they’ll need in the future. Creating 21st Century classrooms, schools and districts is no small order, but it is being done across the nation.

If you are one of those forward-thinking people who is reading this and saying, “It sounds amazing, but it’s just too much to undertake given our resources,” think again. If you are an educator, what one small change could you make that might transform the student experience?

Might you try grouping students more often for more team-based learning? Or embed the teaching of a math skill within the hands-on study of pond ecology? Or study an aspect of Chinese culture by setting up a virtual student exchange connecting students with their counterparts in Asia via Skype?

Once we begin to consider the possibilities of the 21st Century classroom, our schools become more than just places for preparing students for the next level of education. They become places where we truly prepare students for lifelong success and personal fulfillment.

And as educators, isn’t that our real goal?