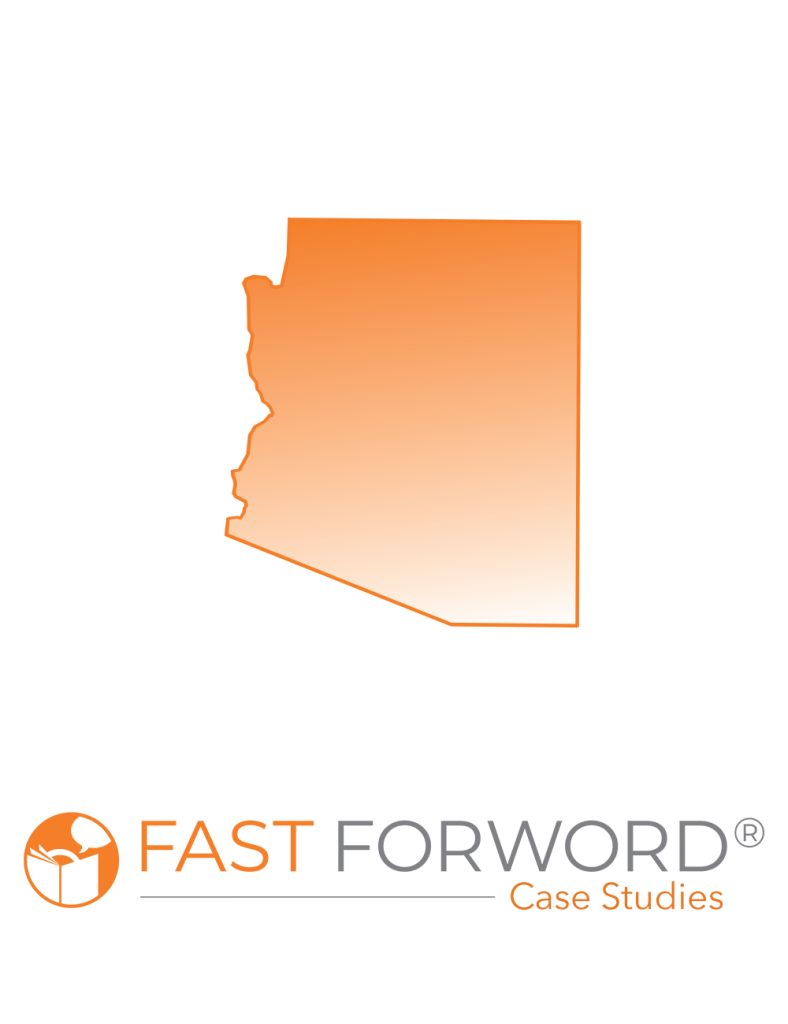 We’ve had students transfer to our district just to be in the Fast ForWord program. It has been an incredible success.

Show Low Unified School District implements Scientific Learning Fast ForWord® software to help students of all ages build critical reading and language skills, and improve their performance on Arizona’s Instrument to Measure Standards (AIMS). Since 2006, the percentage of students passing the AIMS has increased, while special education referrals and discipline incidents have decreased.

Show Low Unified School District is located in southern Navajo County in the White Mountains of Arizona. It is 175 miles northeast of Phoenix and 195 miles north of Tucson.

When Special Services Director Sandy Brimhall-Tarbet arrived in 2005, she noticed the rural district had a high percentage of students receiving special education services.

“During my first year here, I saw that many of these kids had high IQs but were reading poorly,” she said. “One challenge was that the district didn’t have a consistent reading program. So, if you didn’t learn to read by grade three, you were never reintroduced to those basic concepts again, unless you were in special education. We needed a program that could help any child at any age learn those basic reading skills.”

After a year-long search for a solution, Show Low implemented the Fast ForWord software in fall 2006. Fast ForWord is a family of educational software products that accelerate learning by developing the student brain to process more efficiently.

“We selected the Fast ForWord program because it builds those foundational reading and language skills, and it addresses the cognitive skills many students struggle with — memory, attention, processing rate, and sequencing,” said Brimhall-Tarbet.

Each of Show Low’s five schools use the Fast ForWord program differently. At the elementary school level, principals review students’ AIMS scores to determine which students will work on the software during the school year. At the junior high, all students work on the program. At the high school, it is offered as a class that is open to students at every level, including gifted students.

In each building, a lab coach regularly reviews reports from the Fast ForWord software to monitor student performance and identify areas of need. The coach shares the data with classroom teachers who then target their instruction and homework to provide reinforcement where needed.

“Fast ForWord is completely different from other programs we’ve used,” said Brimhall-Tarbet. “It’s individualized. It’s consistent. It keeps kids enthusiastic and motivated. Nothing else comes close to being equal to Fast ForWord. The effectiveness, the sound research behind the program, the way it’s administered — that combination really benefits our students.”

Parents, too, have noticed benefits at home. “Within one week of starting a child on the Fast ForWord program, parents will come in and say, ‘What have you done to my child? He listens to me now. I can tell him to do two things and he remembers them!’” said Brimhall-Tarbet. “At the high school, parents tell us, ‘My child is completely different. She believes in herself. She now thinks she can go to college.’”

In addition to improved student learning and self-esteem, the district has seen other improvements as well. For example, at the high school, discipline incidents dropped 19 percent in one year.

“Within the first three weeks of using Fast ForWord, one teacher who really didn’t support the program at first came in and told us how much one of her students had changed. She said, ‘He’s a whole different kid in my classroom. Before he was an incredible behavior problem. Now he listens and he participates in discussions.’ So, we started tracking the discipline incident rates school-wide and they declined significantly,” said Brimhall-Tarbet. “When a kid feels good about himself, he’s okay with being in school. But if he doesn’t, he’d rather be a ‘bad kid’ than a ‘dumb kid.’ With Fast ForWord, students see that they can read and succeed in school, and that builds their self-confidence.”

The Fast ForWord software also plays an integral role in Show Low’s RtI program. Before a student can receive a special education referral, he or she must participate in the Fast ForWord program for at least six months.

“In our RtI program, teachers and schools must provide several pieces of information before a child is tested to determine eligibility for special education services,” said Brimhall-Tarbet. “The Fast ForWord data is a critical part of this. It gives us a much clearer picture of the students who are not where they should be because of a delay or an environmental issue, versus the students who have a true disability.

“Another benefit is that, often, by the time students have been in the Fast ForWord program for six months, they no longer qualify for special education because they’re now at grade level. The Fast ForWord program is a key reason the percentage of students receiving special education services has dropped in our district,” she said. “It has also helped change the perception that just because a child is behind two grade levels that he or she has a disability. That whole mindset has changed.”

Show Low reports that having Fast ForWord as a mandated part of the RtI process has not only reduced special education referrals, but it has saved the district money as well. “While we still have to do psychological evaluations as part of the referral process, by time the psychologist gets the data from Fast ForWord and the other interventions, it’s very easy and clear to determine if the child has a true disability or just a delay. It helps us ensure children get a correct diagnosis and are not placed in special education for other issues. We’ve also been able to reduce the amount of time students spend working with a speech therapist and have increased the number of students exiting speech therapy,” said Brimhall-Tarbet.

During the 2009-10 school year, Show Low plans to expand the Fast ForWord program to preschool students to address a rise in speech-related issues. “Many young children watch TV all day and are not developing the language processing skills they need,” said Brimhall-Tarbet. “Right now, we’re seeing a huge increase in the number of kids coming to preschool who qualify for speech therapy. We believe Fast ForWord will help our preschool students build those early reading and language skills, while improving their cognitive skills.”

At Show Low Primary School, for example, teachers say they have seen many positive changes among ELL students, including improvement in attention and focusing skills. “They also report that classroom work is being completed in greater quantities and that connections to the concepts being taught are being grasped by some who had been having great difficulties,” said Fast ForWord Coach Anita Margeson. “The self-esteem of most of these students has grown by leaps and bounds. This will be life changing for students in their educational and personal futures.”

In 2009, Show Low offered the Fast ForWord program to community members through a summer program. It was offered free of charge to children and parents who lived in the school district, and was available to anyone living outside the district for an $85 fee.

“Even though we had money budgeted for the summer program, the people who came in from outside the district far exceeded what we needed, so we actually made money. We saw great benefits among those who attended and the buy-in from the community was incredible,” said Brimhall-Tarbet. “Some of our employees were so thrilled with the results that they wanted to participate, too, to improve their brain processing skills. So, we now offer access to the Fast ForWord program free of charge to district employees during the school year.”

Due to the summer program’s success, Show Low will soon make the Fast ForWord software available to the community as part of an after-school program. In addition, the district plans to meet with representatives from the local Community Counseling Center to see if their clients would be interested in using the program, for a fee, after school. Show Low also plans to partner with Northland Pioneer College to offer local community college students the opportunity to work on the Fast ForWord software for credit.

Since 2006, Show Low has realized many benefits from the Fast ForWord program, from decreases in special education referrals and discipline incidents to increased community support. In addition, the district has achieved significant gains on AIMS summative assessments in reading and writing.

“One of the biggest benefits we’ve seen is the progress made by our students, which is supported by our AIMS data,” said Brimhall-Tarbet. “We’ve also seen huge increases at individual schools. At Clay Springs School, the percentage of fifth grade students meeting or exceeding the state standard in reading jumped from 43 percent in 2007 to 91 percent in 2008 to 100 percent in 2009.”

“We’ve had students transfer to our district just to be in the Fast ForWord program,” said Brimhall-Tarbet. “It has been an incredible success.”