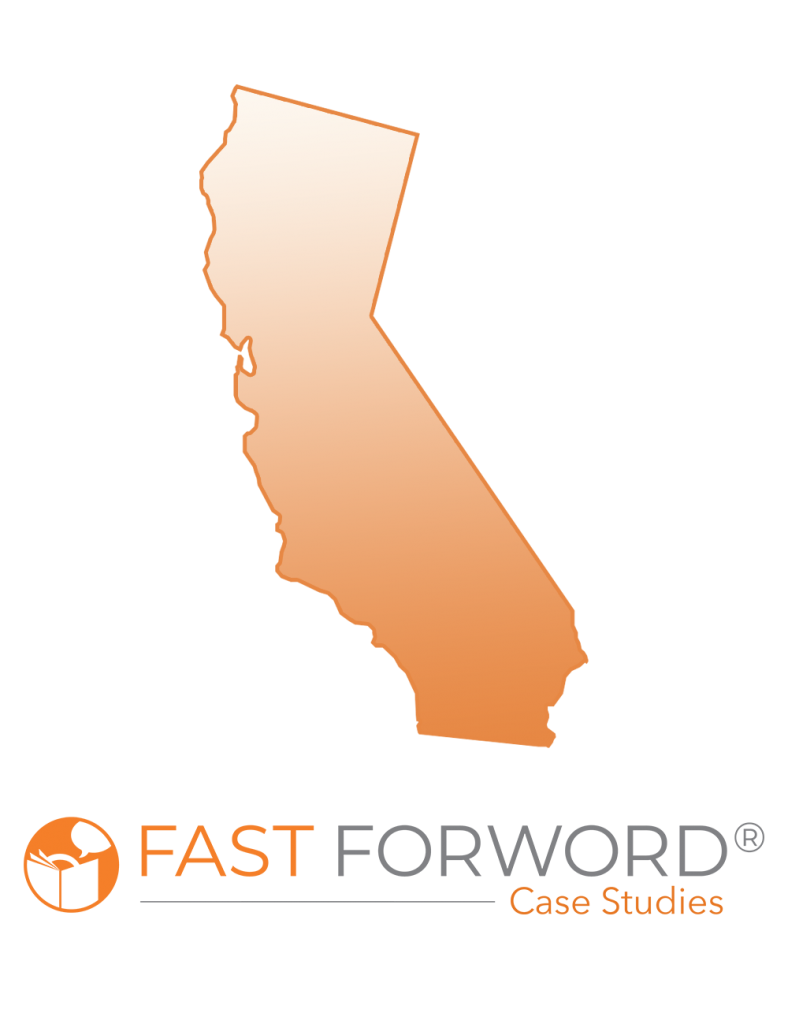 Once a low performing school, Korematsu Discovery Academy has achieved dramatic gains thanks to the hard work of teachers, students, parents and school leaders. As part of its efforts to improve, the Title I school began using the Fast ForWord® program in 2010 to accelerate learning for struggling students. Since then, students have made double-digit gains on the California Standards Tests (CSTs) in English-language arts and mathematics, and the school has raised its Academic Performance Index (API) score by more than 100 points.

Located in East Oakland, Fred T. Korematsu Discovery Academy is part of the Oakland Unified School District (OUSD). More than 90 percent of students qualify for free or reduced-price lunch and 65 percent of students are English learners. The school’s mission is to ensure students are prepared to participate fully in the academic and information-based discourses of higher education and the larger economy.

In 2008-09, the urban Title I school faced a variety of challenges. Since it did not make Adequate Yearly Progress (AYP) for two consecutive years, it was identified for Program Improvement. That year, 84 percent of students in grades 2-5 failed to achieve proficiency on the CSTs in English-language arts, and 62 percent of students did not achieve proficiency in mathematics.

During the 2009-10 school year, Korematsu Discovery Academy looked into the Fast ForWord program and, with support from OUSD, launched the program in fall 2010. Fast ForWord is a family of educational software products that accelerate learning by applying proven research on how the brain learns.

“Our goals were to reduce students’ rates of failure, to help them move closer to proficiency, and to help them benefit more from our classroom instruction,” said Charles Wilson, principal of Korematsu Discovery Academy.

The school began using the Fast ForWord software in an after-school program for students identified at the Below Basic and Far Below Basic performance levels on the CSTs. Students worked on the software 30 minutes a day in the computer lab.

Through the individualized, adaptive exercises of Fast ForWord software, students build memory, attention, processing, and sequencing skills in the areas of English language and reading. The program supports struggling students, as well as those working at or above grade level, by building their brain fitness and improving their ability to learn and retain knowledge.

The school also implemented the Fast ForWord program in a before-school program for English learners who scored at the lower levels of English language proficiency on the California English Language Development Test (CELDT). As the Fast ForWord exercises build brain fitness, they improve the processing efficiency of the brain so that individual phonemes within words can be more easily differentiated. This speeds up the process of learning and comprehending spoken and written English, and builds fluency, vocabulary, syntax, grammar, and other language skills.

“Most of our English learners work on the Fast ForWord Language v2 program, which helps with listening accuracy, phonological awareness, and language structures,” said Wilson. “I’ve seen it make a big difference in students’ receptive language skills. Our teachers report that students are able to understand English more quickly, maintain their focus for a longer period of time, and are better at following directions.”

In addition, midway through the 2010-11 school year, the school decided to begin using the Fast ForWord program during the school day with all kindergartners. In fall 2011, it also made the software available to selected pre-kindergarten students as well.

“We think the Fast ForWord program is something every kindergartner can benefit from, particularly those students who are struggling with phonemic awareness or who have early reading challenges,” he said. “In areas like letter names and phonemic awareness, our kindergartners who have used the program are definitely moving faster than students in previous years who did not use the program.”

Since 2009, Korematsu Discovery Academy has achieved double-digit gains on the CSTs in English-language arts and mathematics.

Likewise, the school’s API score increased, rising from 641 points in 2009 to 788 points in 2011. Over this two-year period, the school made API growth of 147 points. The API is an annual measure of the academic performance and progress of California schools; scores range from 200 to 1,000, with a statewide target of 800.

“The Fast ForWord program increases students’ abilities to take on a heightened cognitive load. When they’re in class, they’re better able to focus, sustain their attention, follow directions, and work independently,” said Wilson. “I believe the huge reduction in the failure rate on the CSTs and the 103-point gain we made in our API in one year is related to this.”

As a result of students’ substantial gains, Korematsu Discovery Academy received an award from OUSD for the largest increase in the proficiency rate of English learners of all elementary schools in the district. The school also received the Alameda County English Learner School of the Year award for achieving the most improvement among all elementary schools in the county.

“Students now bring a level of cognitive fitness to their work that they didn’t have previously. Their reading ability has improved. They’re able to retain information better. They’re able to make connections faster. All those cognitive skills — memory, attention, processing rate, and sequencing — are very clearly manifested in the classroom,” said Wilson.

“Overall, the climate of the school is becoming more about students participating in the academic discourse of the school and less about remediation,” he continued. “I think Fast ForWord has played a role in helping us get to that place. Students can participate at a much higher level than they were previously able to — in everything from following directions to sharing their opinions to collaborating. All of that combined builds up to a successful student who can sustain their focus to complete their work on a standardized test like the CST. In our previous environment just passing the test was hard enough for us, but Fast ForWord has helped us move kids to a great place where they’re more well-rounded as thinkers because they’re now better able to handle the cognitive load than they previously were.”

In 2012, Korematsu Discovery Academy plans to begin using Reading Assistant software with selected students in classrooms across the school.

Reading Assistant software combines advanced speech recognition technology with research-based reading instruction to help students strengthen their reading fluency, vocabulary and comprehension. Reading Assistant acts as a personal, interactive tutor, allowing teachers to easily provide individualized, guided oral reading practice for each student.  The Reading Assistant program listens to students as they read out loud, intervenes when the student falters, and allows for self-correction. Clickable glossary words with definitions available in English or Spanish build vocabulary and “Think About It” questions and quizzes at the end of each selection ensure comprehension. Teachers receive assessment reports and can listen to audio samples of their students as if they had been sitting next to them while they read.

“With large class sizes, we don’t have the time to do the amount of in-depth guided oral reading practice that we’d like to do with each student. Reading Assistant will to help us supplement and enhance that work,” said Wilson. “Many fluency programs focus only on building fluency. What we like about Reading Assistant is that it focuses on comprehension as well. We have students who are very fluent but who have no idea what they’re reading. We’re excited to begin using Reading Assistant to give students extra opportunities to strengthen their ability to read with fluency and comprehension. It will be a nice complement to Fast ForWord to help accelerate learning for those students who are approaching proficiency and for those who have already reached proficiency.”