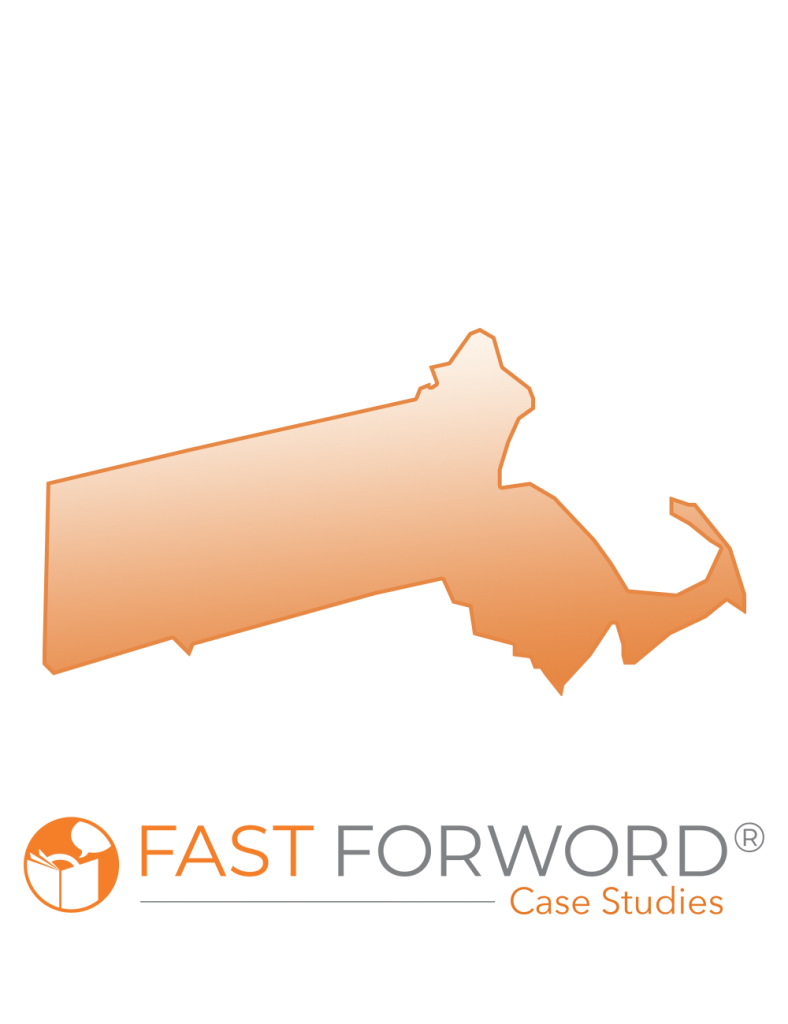 As the director of this program, I’m very grateful for the success our students are demonstrating. We could never have achieved this level of success with any other program. The neuroscience behind the Fast ForWord products absolutely is on target for training our students to be successful in all learning situations.

Everett Public Schools implemented Scientific Learning Fast ForWord products to improve achievement among struggling readers. In less than one year, the number of students achieving proficiency in reading on the Massachusetts Comprehensive Assessment System (MCAS) more than doubled — from 16 percent in 2006 to 38 percent in 2007. In addition, one-third of students advanced from the “Needs Improvement” to the “Proficient” level on the MCAS.

“The Fast ForWord program is absolutely phenomenal. I can’t believe how well this program works.”

Everett Public Schools in Everett, Mass. is an urban district located a few miles north of Boston. Most students come from highly mobile, economically disadvantaged families. There are 55 languages spoken in the district. English is not the first language for nearly 44 percent of students.

“In the 1990s, Everett’s MCAS scores were among the highest in the state,” said Margaret Blake, Title I director for Everett Public Schools. “Since then, our community demographics have changed dramatically and our poverty level now is among the highest in the state. Our most recent MCAS scores determined that as a community, our subgroups were under corrective action for the second year in a row.”

In fall 2006, Everett Public Schools implemented the Fast ForWord software to improve reading proficiency in grades three through eight. The Fast ForWord family of products accelerate learning by training the brain to process more efficiently, the way physical workouts train the body to be fit and strong.

During 2006-07, approximately 1,290 students in six schools used the Fast ForWord products 50 minutes per day, five days a week. Half of the students had six months of training. The other half had only four months of training. Each school has two computer labs staffed by reading specialists and degreed paraprofessionals who provide additional tutoring as needed.

“Our community goal is to provide services to all children in need. We continue to work with every student in the lab until they reach grade level proficiency in reading,” said Blake. “We enroll students who are closest to proficiency on the MCAS and work our way down to those who have failed the MCAS. Last year, 300 special education students enrolled in the Fast ForWord labs made significant gains on their 2007 MCAS tests.”

An ongoing challenge for Everett Public Schools is a high mobility rate, which has reached 34 percent. “Our schools lost 1,000 students in June 2007 and 1,400 new students replaced them in September 2007,” said Blake. “While we lost many students who had been trained in the Fast ForWord program, we felt good knowing they left with much better reading and language skills.”

According to Blake, students across the district love working with the Fast ForWord software. “Students go back to their classes and tell other students about their progress,” said Blake. “The kids who are at the top of their classes see these students moving up and are requesting permission to be part of the lab programs.”

At Alfred E. Parlin School, for example, “the principal has students at his door every morning asking when it’s their turn to get on the Fast ForWord software,” said Blake. “When a student completes Fast ForWord Reading Level 5, the principal announces on the intercom that the student has ‘graduated’ and there is now an empty seat in the lab. The immediate response from the others is, ‘Now is it my turn?’ The kids love doing the program. At first it is difficult for them, but in a short period of time, they begin to understand it and move up significantly in each of the areas they are being trained. We have many students who have completed Level 5 in reading. This is a very difficult level and contains lots of high school vocabulary.”

Students in the upper grades enthusiastically spread the word about the Fast ForWord program as well. “Before we had the Fast ForWord labs, many eighth grade students who were reading at a second or third grade level felt defeated and had low self-esteem,” said Blake. “Now, they’re advocates who tell everyone, ‘You have to join the Fast ForWord program. It made me smart. It really works.’ And it does. This is especially true at the high school level.”

From 2006 to 2007, student progress was evaluated before and after Fast ForWord participation. On average, students in grades five through eight made significant improvements on their MCAS reading scores. The number of students performing at or above the proficient level in reading on the MCAS jumped from 16 percent in 2006 to 38 percent in 2007. The total number of students achieving proficiency more than doubled, increasing from 138 students in 2006 to 326 students in 2007.

The results for student subgroups (economically disadvantaged students, limited English proficient students, and student with disabilities) also showed improvements. On average, students in these demographic groups initially performed at lower levels than their peers using the Fast ForWord products, but achieved gains in the same range as their peers.

Individual schools have excelled as well. Everett’s Parlin School went from the lowest scoring to the highest scoring school in the district in English language arts and mathematics.

Students in grades three through nine were also evaluated with the Gates-MacGinitie Reading Tests. Students who used the Fast ForWord program increased their grade equivalent scores by 22 months in the 10 months between the fall 2006 pre-test and spring 2007 post-test.

“The success the kids are achieving is remarkable. It is such a joy to observe,” said Blake. “Scientific Learning is one of the best organizations I’ve ever partnered with. The level of support we’ve received is more than we ever anticipated. They’ve made such a difference for so many successful students to achieve proficiency. As the director of this program, I’m very grateful for the success our students are demonstrating. We could never have achieved this level of success with any other program. The neuroscience behind the Fast ForWord products absolutely is on target for training our students to be successful in all learning situations.”