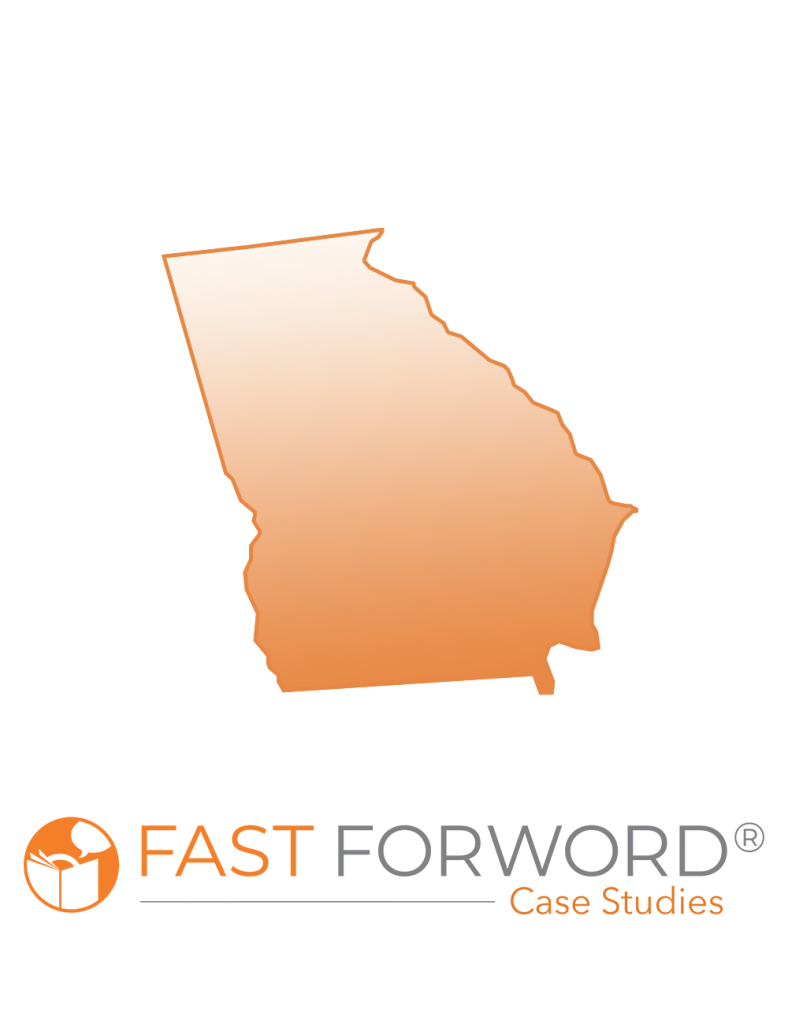 People believe in the Fast ForWord program because they’re seeing a great deal of improvement, especially from children in poverty. Students are positive about it, they’re engaged, and it gives them confidence. We have had some remarkable success stories.

Bulloch County Schools is a growing district in Statesboro, Ga. More than half of the students receive free and reduced meals. In 2007, two schools did not meet AYP criteria for academic performance and one of these schools, Langston Chapel Middle School, was in “Needs Improvement” status.

“At that time, consistency was a big issue in our schools,” said Dr. Jody Woodrum, assistant superintendent of teaching and learning for grades K-5. “Decentralized education had led to a hodgepodge of programs; no single intervention program was available in every school.”

That changed when Dr. Lewis Holloway joined the district as superintendent in 2007 and introduced the Fast ForWord program. Fast ForWord is a family of educational software products that accelerate learning by developing the student brain to process more efficiently.

“One of the things that sparked my interest in Fast ForWord is that it’s based on research into how the brain learns,” said Holloway. “We know from the Hart and Risley study that children living in poverty start kindergarten with a much smaller vocabulary than children with two college-educated parents. The issue is not that these children can’t learn. They simply haven’t heard all the sounds that kids in middle or upper-middle class homes have heard. With Fast ForWord, we can create changes in the brain that provide a foundation for learning and reading success.”

To target students most in need, the district first installed the Fast ForWord software at Langston Chapel Elementary and Middle Schools as a pilot. “We asked the school board to visit these two sites because we wanted them to see students using the software,” said Holloway. “While they were there, one eighth grader said, ‘You have to buy this for every child in Bulloch County!’ Coming from a 13-year-old, that’s pretty powerful.”

Today, the Fast ForWord software is available in all 15 schools. “We’ve become more systematic in our interventions with Fast ForWord,” said Holloway. “We now have standard expectations across the district.”

In Bulloch County, the Fast ForWord program is targeted toward students who score between 20 points below and 10 points above 800, the passing score on the CRCT. “Initially, we tried to work with students who were struggling the most,” said Holloway. “We started in the gateway grades of 3, 5, and 8 and rolled it out from there to help students who needed that extra push to make AYP. By beginning the program now in kindergarten and first grade, we can catch problems early so the achievement gap will not exist later on.”

Each computer lab is managed by a teacher or paraprofessional. With Fast ForWord’s Progress Tracker, an online data analysis and reporting tool, staff members monitor each student’s daily performance. They then make recommendations for interventions and individual adjustments as needed. “From students struggling at Tier 2 to those already receiving special education services, this program has provided an effective, consistent strategy for intervention and differentiation district wide,” said Woodrum.

Holloway commented, “Fast ForWord also provides us another tool for rewarding and recognizing student performance.” To motivate student achievement at each school, the district recognizes Fast ForWord successes in a newsletter called Kudos, which is published every two weeks. The newsletter highlights school accomplishments and growth, as well as completion, attendance and participation rates. “This emphasis on positive performance is found at the school level as well, with principals recognizing students, too,” said Woodrum.

“People believe in the Fast ForWord program because they’re seeing a great deal of improvement, especially from children in poverty,” said Holloway. “Students are positive about it, they’re engaged, and it gives them confidence. We have had some remarkable success stories.”

For example, the mother of an eighth grade student at Langston Chapel Middle School came to a school board meeting to explain how her daughter went from being a nonreader to reading aloud and understanding advanced text after using the Fast ForWord program. Another struggling eighth grader went from 50 to 60 absences a year to none as soon as she started Fast ForWord. Holloway added, “She is now making solid grades at the high school and recently wrote to thank her former principal and to tell her she has decided to go to college to be a nurse. We also had a fifth grader who was autistic and nonverbal. He now speaks in complete sentences, and the staff at his school attributes Fast ForWord with this change.”

In addition to individual student successes, Bulloch County has experienced positive results at the school and district levels.

In 2009, the district and all of its 15 schools made AYP — a distinction only 28 percent of Georgia’s school districts achieved. After making AYP for the second consecutive year in 2009, Langston Chapel Middle School was removed from the “Needs Improvement” list. The district is currently recognized as one of only 20 Georgia High Flying School Districts based on student academic performance.

While students who have participated in the Fast ForWord program started at a much lower average level than non-participants on the CRCT, they are now closing their achievement gap. In 2007, prior to Fast ForWord use, the reading gap between future participants and students district-wide was 32.4 points. A year later, after use of Fast ForWord, the gap had decreased to 26.1 points. Students who completed three products gained an average of eight points on their CRCT reading score.

In addition to the CRCT, the district uses an adaptive, growth model assessment called Measures of Academic Progress (MAP) to identify individual annual growth needed to reach grade level expectations. Students who completed one Fast ForWord product gained an average 4.6 points on MAP, while those who completed at least one product with strong implementation fidelity gained 7.2 points.

During the 2008-09 school year, students’ reading skills were assessed before and after completion of each Fast ForWord product with a computerized assessment called Reading Progress Indicator (RPI). On average, students who had valid pre- and post-test scores improved six months in reading ability in four months of product use and moved from the 19th to the 29th percentile. When looking at only those students who made gains, the average improvement was one year and two months of reading ability in four-and-a-half months of software use.

To date, according to RPI, of the students who began or continued to use the products during the first half of the 2009-10 school year, 36 percent have achieved a gain of one or more years in reading ability since they first used the products. As a result of its success, the district plans to expand the Fast ForWord program to after school, summer school and English Language Learner programs.

“Fast ForWord just makes sense, especially when you begin to understand why there’s an achievement gap, why it’s not getting better, and why schools across the nation are struggling so hard to close that gap,” said Holloway. “The issues we face with students in poverty are more about language and hearing than anything else. By varying the speed and pitch of phonemes with computers and headphones, students develop neurological pathways to hear and understand sounds and words, which provides a base for reading skill improvement and academic success.

“When Fast ForWord works, it’s almost like magic — and we don’t have much magic these days in school,” he said. “It’s been very positive for us.”