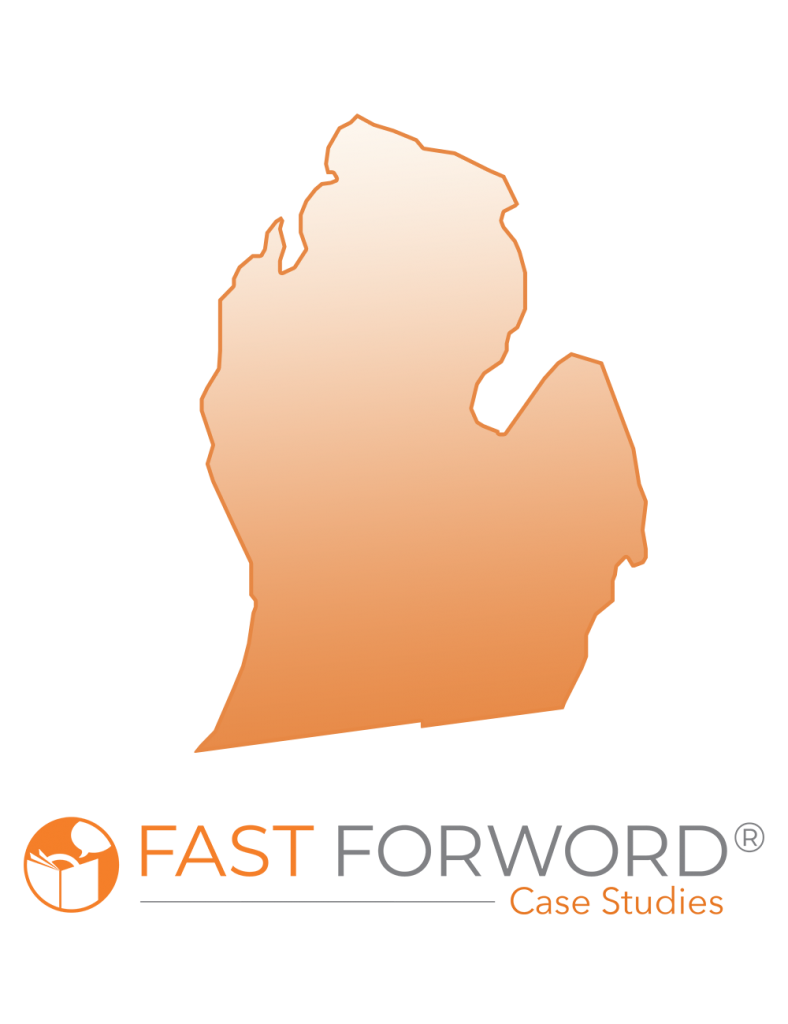 In all my 30 years of education, this is the first program that I think really provides hope for the kids. Everything else was just a stopgap, but this is giving them the gift of ability, which we had thought all along you couldn’t do a lot about. Fast ForWord is the only thing I have seen that actually increases their ability to learn.

Some educators learn about Fast ForWord products through word of mouth. Others attend conferences and listen to speakers from Scientific Learning. Sharon Fouts, Assistant Superintendent of Schools for the Swartz Creek, Michigan, Community School District, actually heard about it for the first time while she was driving to work.

“I had just gotten a CD that day from an educational research organization I belong to,”she recalled, “and on it they talked about products that were now available that could make a significant impact on learning. And they mentioned Fast ForWord.” That, Fouts said, really made her sit up and take notice. “If independent researchers were recommending it, I wanted to take a look.”

Fouts did some investigating, and, impressed with what she found, she took her information to the superintendent in the fall of 2004. “In the beginning, we agreed, we would just do something minimal. So we went before the school board and got them to fund three workstations in three buildings.”

The children chosen to participate ranged from second graders, who were facing Michigan Educational Assessment Program testing the following year, to at-risk middle school students hand-picked by principals. Without regard to age or ability, they all made rapid progress from the start.

“The results were undeniable—the kids that had a Fast ForWord intervention made significant gains during that period on their STAR tests.”

According to Fouts, the results came in fast, and they looked really good. “We use STAR testing from Renaissance Learning. We gave the kids the test in the fall, in January, and again in the spring.” The results were undeniable—“the kids that had a Fast ForWord intervention made significant gains during that period on their STAR tests.”

Having decided to continue the Fast ForWord software program into the summer, the school district also measured the summer school group at the beginning and at the end of the session. “We saw tremendous results,” said Fouts, “so we went to the Board at the end of summer school and asked them to increase our accessibility to the program.”

From a small implementation in three buildings, the district now moved to install Fast ForWord software in half a dozen schools, which encompasses almost the entire district. It wasn’t long before accolades began coming in from teachers, parents, and the kids themselves.

A teenager with a library card.

Fouts recalled hearing many testimonials from teachers who were reporting that formerly reluctant readers were beginning to have the confidence to read out loud, and that kids who had had little interest in reading were now reading voluntarily.

But her favorite story concerns a high school student who had never read a book all the way through in his life, and who had avoided reading at all costs. After using Fast ForWord products in summer school, “he went up to one of the counselors and said, ‘Hey! I got a library card!’ The counselor said, ‘You got a library card; what caused that?’ and he said, ‘Because I took Fast ForWord, and now I’m reading better, and I really like it.’

“Can you imagine?” Fouts marveled. “Here’s this kid who’s now including reading for pleasure as one of his activities. Prior to that, it would have been one of the last things he chose to do.”

According to Fouts, the school district has also had tremendous success in using Fast ForWord products as an intervention for Special Education referrals. “We now require that any student being referred for a learning disability in language or math go to Fast ForWord before we consider doing any further testing,” she said.

Partly, this was a money issue. “Like most districts,” Fouts said, “we operate on a pretty tight budget. Our superintendent showed the board that if we could keep eight students a year from entering Special Education by using Fast ForWord, we’d completely recover our costs in five years.”

How is this going? “We actually had 30% fewer referrals last year,” she reported. “And some students were in the middle of being tested for Special Education when we initiated this program, and several of them did not qualify after their Fast ForWord intervention.

“We also had two students in the district that we actually took out of Special Education because they did Fast ForWord. The intervention,” she concluded, “made a big difference for our special needs kids.”

From misbehaved to well behaved.

How did the students themselves react to using Fast ForWord software? “Of course, the first couple of days, the kids were behaving the way they normally behave in class. But after a week or so, if you’d go into the lab, they were all engaged. Nobody was goofing around or looking around. Everybody was seeing if they could beat their own last score.” Fouts believes that “the program itself convinced them to take it seriously.” Parents all report, she says, that their kids like to use Fast ForWord products.

Now, Fouts says, when visiting educators come to her school district, “I tell them I began my career as a Special Education teacher. Then I moved into being a remedial reading teacher. I was a classroom teacher as well.

“But when I became a principal, and I watched kids go through my building from kindergarten through 5th grade, I could see that they left pretty much in the same order in which they came in. All the interventions we were working so hard with made very little difference in their ability to learn.”

Fouts goes on to say that, “in all my 30 years of education, this is the first program that I think really provides hope for the kids. Everything else was just a stopgap, but this is giving them the gift of ability, which we had thought all along you couldn’t do a lot about. Fast ForWord is the only thing I have seen that actually increases their ability to learn.”